Nicole Kelley is a 30-year-old town counsellor who enjoys charity work, spreading right-wing propoganda and walking. She is kind and reliable, but can also be very pessimistic and a bit grumpy.

Since the Fall of 2003, THE HORROR FICTION REVIEW has been featuring interviews with some of the top names in the genre. Below is a sample of some of our favorite quotes from various issues (some now out of print):

HFR: What’s your opinion on the state of horror fiction in 2004?

DOUGLAS CLEGG: My opinion is that, creatively, it’s flourishing. Business-wise, which is beyond the control of any novelist, it’s doing pretty well considering how little marketing and advertising is done for horror novels. But you know what? I’d write my books no matter what the state of the business might be. I follow a muse, and by that I mean I’m writing from an inner drive to tell these stories, not an outward sense or a market.

HFR: Any advice to new writers?

SEPHERA GIRON: Read alot. Write alot. Listen to everyone’s opinions but don’t necessarily follow their advice! But seriously, if you don’t plant your butt in the chair and your fingers on the keyboard, nothing will ever get done.

HFR: What’s your opinion on the state of horror fiction in 2004?

BARRY HOFFMAN: It’s politically correct to say there’s been a rebirth in horror and point out how many authors are getting published. But I’ve never been an advocate of political correctness. There ARE probably more small presses now than at any time in the past and it’s possible that more authors are being published, especially compared to the 90s. But you have to keep in mind that typical print runs of a small press are in the hundreds. Mass market publishers (the “big boys”) don’t publish much horror as “horror.” What they do is publish a decent amount of horror as thrillers or dark suspense. I’ve seen promotional material that accompanies these books and these releases mentions the word “horror” numerous times. Yet, they are insisting the book isn’t horror at all. It’s a marketing ploy because many chain bookstores no longer have a horror section.

HFR: How are you novels doing in the United States?

TIM LEBBON: Very well, thanks! My first novel for Leisure (The Nature of Balance) went into a second printing. I haven’t had a sales figure for Face yet, but I believe it also sold well for them.

HFR: How do your novels sell in the UK?

TIM LEBBON: Short answer – they don’t. As yet I don’t have a UK publishing deal. Anyone in the UK who wants to read my stuff generally has to buy it from Amazon or some of the specialist dealers. It’s a real shame, but there aren’t that many horror writers in the UK whose work is being published at present. It’s a vicious circle here…publishers don’t buy horror because they can’t sell it (that’s what I’ve been told time and again), and they can’t sell horror because they don’t publish it!

HFR: If you had a gun aimed at your head by a maniacal fan, and were given 5 minutes to tell him/her who or what most inspired you to be a writer, you’d tell the person…

TOM PICCIRILLI: It was Jesus. Jesus loves us all. Jesus wants you to put down the gun.

HFR: Can you share your writing schedule (if any) with us?

GARY A. BRAUNBECK: I get up in the morning, weep uncontrollably for an hour, have coffee, feel guilty about every wrong I’ve committed since the moment I was born, beat my head against the wall in a blind rage until I lose consciousness, then come-to forty minutes later, usually with a story idea. Wow, this might explain the headaches…

HFR: Any advice for new or struggling writers?

GARY A. BRAUNBECK: …don’t try to be the next Stephen King or Clive Barker or Richard Laymon or Anne Rice or…whoever. Believe it or not, it’s your world-view editors want to see filtered through your stories and novels; the reason King and Laymon and Barker and all the other biggies have been successful is because they stayed true to their own muse, their own vision. We’ve seen enough pale imitators; be the real thing.

HFR: Do you find that “serious” horror fans are willing to accept a horror satire?

JEFF STRAND: We;;, I don’t really consider my books horror satires…certainly not in the Scary Movie sense. They’re a;; tongue-in-cheek in a big way, but when the ants get somebody in Mandibles (and they get lots of people!) it’s meant to be genuinely horrific. I’ve found that a lot of horror fans are not only willing to accept funny horror, but they embrace it. They love it! On the other hand, the people who might despise my books and send me hate mail aren’t going to buy something called Single White Psychopath Seeks Same in the first place, so I’m shielded from the potential negative reaction.

HFR: Do you plan on sticking to horror, or are there other genres you would like to explore?

BENTLEY LITTLE: I’m a horror writer. I read a lot of different types of fiction, but I write horror. Period I’m not one of those pansies who claim that I’m just an author and shouldn’t be categorized. I don’t write “dark suspense” or “dark fantasy” or any of those other squirrelly euphemisms used by the candyasses who are afraid of aligning themselves with horror. I write the real thing.

HFR: You seem to keep a mysterious persona, rarely appearing at book signings or horror conventions. Why?

BENTLEY LITTLE: I’ve done a few book signings, one for a friend of mine who’s a bookseller, one for a bookstore at my old college, and one with the late Richard Laymon because he asked me to. But one of my great phobias is book signings. I’m deathly afraid of being one of those pathetic guys sitting all alone at a folding table outside a mall bookstore while indifferent customers walk by. So I don’t do them. As for conventions…Well, as I see it, I’m a writer, not a performer. I shouldn’t be expected to entertain people with my antics. If people want to read my fiction, that’s great. I hope they enjoy it and come back for more. But I feel no need to meet readers or talk to them. Everything I have to say, I say through my work. I’m also not particularly social. Besides, horror, for me, is a literary preference, not a lifestyle. I don’t dress in black or decorate my house with skulls or any of that crap. I just live my normal life and…write horror novels. So conventions don’t really appeal to me.

HFR: Some HFR reader may not know there was a rumor on the Internet claiming you are actually Stephen King. Can you tell us what your first thought was when you heard this?

BRYAN SMITH: Actually, my first thought was, “What, already?,” because as a big fan of King, I knew there was an outside chance some conspiracy-minded people might believe this. The guy who nearly killed King with his van was named Bryan Smith, and the accident happened on June 19, 1999. June 19 just happens to be my birthday. When King decided to incorporate a fictionalized version of the accident into his Dark Tower tale, I figured it was only a matter of time until somebody came up with this theory. The only thing that surprised me was how far in advance of the release of HOUSE OF BLOOD it happened. But, no, once and for all, I am NOT Stephen King. I wish I had his money, though.

HFR: Do you think there is any subject too taboo to use in a novel?

NICK MAMATAS: Nope. And that’s not a matter of opinion, either; the fact is that every supposedly taboo subject has had novels written about them, and if not novels, plays and poetry. We have five thousand years of literate civilization out there. You name it, someone committed it to paper, or clay tablets, or papyrus, or whatever. 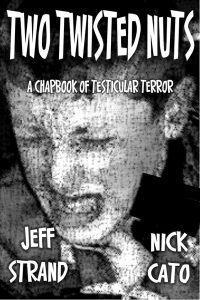 “What Jeff Strand and Nick Cato have constructed here might be the ultimate in relationship therapy.”
-Andre Duza (Author of DEAD BITCH ARMY)

“The tales in Two Twisted Nuts form a disturbing duet, sung in piercing falsetto by a couple of seriously unstable gentlemen.”
-Lee Thomas (author of STAINED)

TWO TWISTED NUTS will be available in April 2005.

This is a limited edition chapbook of 500 copies, perfect bound cover.